This supplement for the Ironsworn tabletop roleplaying game takes your quests to the deepest, darkest reaches of the Ironlands. Plunge into subterranean caverns. Explore untracked forests and foreboding swamps. Journey across icebound wastes. Uncover lost secrets within ancient ruins.

To fulfill your sworn vows, you will brave the most dangerous places of the world and face the most terrible foes. Will you escape the depths? Play to find out.

With an array of new options and tools, Ironsworn: Delve is the perfect companion for your Ironsworn campaign—in or out of the dungeon.

Note: This supplement requires the use of the Ironsworn core rulebook, which is free to download.

About the Delve Digital Edition

For Ironsworn information and resources, or to purchase print editions, please visit ironswornrpg.com.

In order to download this game you must purchase it at or above the minimum price of $12.50 USD. You will get access to the following files:

Support this game at or above a special price point to receive something exclusive.

Every sale of Ironsworn: Delve at itch.io adds a free copy to the community pool for those whose budget doesn't enable them to pay the listed price. If you're dealing with financial hardships and unable to budget for a copy of Delve, please claim one of the free community copies. The community pool is refreshed at least once a month.

please remove a community copy, I purchased my own copy and will upload it to share with my friend

Will there be new community copies for the new year or are these already gone?

The pool has been refreshed.

hoping for a refresh soon

Any chance of a Community Copy refresh in time for the holiday season, please, Shawn?

Many thanks! Very much appreciated!

Thank you!! This game is awesome!

Community copies added. Give me a holler if they are gone and I'll get you sorted.

literaly bought the game yesterday on rive thru rpg before i saw this cause i had some spare money, though i am happy to gove this good prodject some money for the trouble

The Ironsworn: Delve is not only a great expansion for Ironsworn but also full of inspirational world building oracles that are also useful for other TTRPGs.

I highly recommend this expansion.

this expansion is awesome!

Man, i so happy that i get my copy

Ironsworn: Delve is a 240 page expansion to the already beefy Ironsworn core. It has the same extremely solid level of quality, and it adds rules orbiting around exploring dangerous adventuring sites. Furthermore, Delve also throws in a bunch of sample dungeons, monsters, and anomalies (basically locations that are also monsters,) plus a *lot* of new character build options, including Assets that drive gameplay themed around money and occult artifacts. Content-wise, pretty much everything in core is enhanced or optionally altered here.

Core Ironsworn primarily involves travel and overworld encounters, so Delve surprised me a bit with the amount of energy it devotes to making a separate game out of dungeon/location-diving. There's a set of Moves and mechanics specifically to handle adventuring sites, and they're comprehensive---although they feel really similar to the way Ironsworn handles combat and travel, so you don't really have to learn anything radically new to use them.

Delve also comes with a flexible, robust dungeon-generator. It's done primarily through keywords, which you can randomize if you like, and which are general enough to cover most possible options for spooky places you might want to set foot in. The generator is strongly tailored to Ironsworn, so you won't get tactical grids out of it, but if you want to just yank out the generator and use it elsewhere, it *is* very good for quickly coming up with overall pictures of dungeons and their inhabitants.

Overall, if you like Ironsworn, it's absolutely worth supporting Delve. Delve doesn't radically change the game's contents, but it provides a wealth of support and resources and fleshes the game out even further.

And if you haven't checked out Ironsworn yet, do that. It's huge, it's free, and it's very well made.

A great addition to a great game. Ironsworn was the first long form solo game I ever played. It sent ne in directions I had no idea I would go.

This is an excellent way to go deeper into the game and play in environments you may not have thought to put your character in before.

Thank you for this game! I'm having an awesome time!

Excellent work! Excited to include this supplement in my solo campaign

Such an incredible game!

Beautiful. Thank you so much. Game is fantastic

Wish I was quicker in claiming a free copy! I’ll just have to save up then.

Reply
Jinx the Goblin2 years ago(+1)

Or wait until more community copies are available 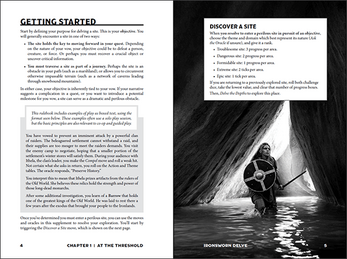 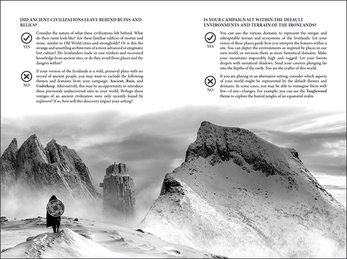 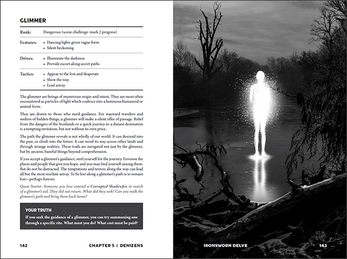 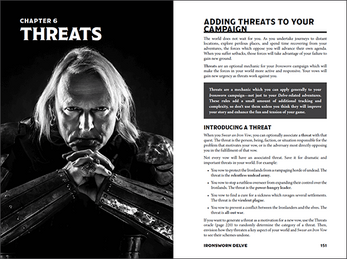 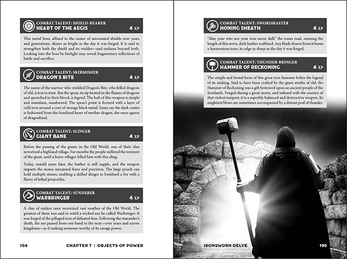